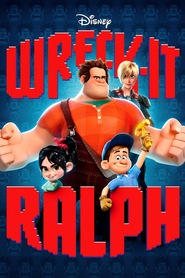 Wreck-It Ralph is the 9-foot-tall, 643-pound villain of an arcade video game named Fix-It Felix Jr., in which the game's titular hero fixes buildings that Ralph destroys. Wanting to prove he can be a good guy and not just a villain, Ralph escapes his game through the power cord and lands in Hero's Duty, a first-person shooter where he helps the game's hero, Sergeant Calhoun, battle against "Cy-Bugs", the game's alien invaders. He later enters Sugar Rush, a kart racing game set on tracks made of candies, cookies and other sweets. There, Ralph meets Vanellope von Schweetz, one of that game's characters, who has learned that her game is faced with a dire threat that could affect the entire arcade, and one that Ralph may have inadvertently started.