The Flying Swords of Dragon Gate 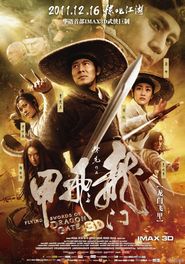 The Flying Swords of Dragon Gate picks up three years after the infamous Dragon Inn was burnt down in the desert when its innkeeper Jade vanished. A new gang of marauders had taken over - innkeepers by day and treasure hunters by night. The inn is the rumoured location of a lost city buried under the desert, and its hidden treasure would only be revealed by a gigantic storm every 60 years. The gang used the inn as a front to locate the lost treasure.