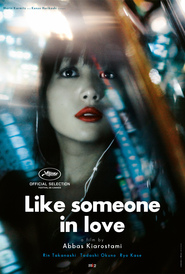 Dispatched to an elderly professor, a sociology student who moonlights as a high-end escort finds her latest client less interested in sex than in cooking her soup, talking, and playing old Ella Fitzgerald records. Eventually, night gives way to day and a tense standoff with the studentâ€™s insanely jealous boyfriend; but nothing is quite as it appears on the surface. Are these characters â€“ who conjure in one another the spectres of regret and roads not taken â€“ meeting by chance, or is it fate? Is this love, or merely something like it?